In an olefins plant, the reliability of ethylene cracking furnaces is one of the deciding factors used to indicate whether or not the plant can be operated at its design productivity. If a furnace shutdown occurs due to a reliability-related issue, then ethylene productivity will drop and lead to opportunity loss, material and scaffolding costs, etc. For example, the cost of shutting down a furnace with an ethylene productivity of 4.5 tph (tons per hour) to replace one damaged radiant tube can exceed $300,000. These costs can skyrocket in the event of a fire. Thus, maintaining or enhancing the reliability of furnaces becomes one of the crucial tasks to enable a plant to achieve its productivity target.

In accordance with a reliability centered maintenance (RCM) program, the radiant tube- where feedstock such as naphth, liquefied petroleum gas (LPG), etc., is cracked-is considered one of the major components of a furnace due to its impact and the significant consequences when it fails to function. 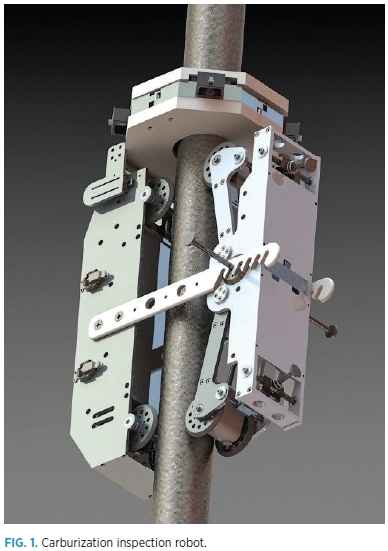 The carburization inspection robot is capable of climbing radiant tubes with outside diameters of 60 mm–160 mm at a speed of 3.5 m/min. The robot can be equipped with two or four sensors, depending on tube spacing. The minimum accessible tube spaces are 17 mm and 40 mm for two and four sensors, respectively. While the robot is moving along the external surface of the radiant tube, it simultaneously measures and collects a set of carburization data with a resolution of up to 1 cm, or up to 1,400 points/min, compared to a handheld carburization detector, which can measure and collect data at about 10 points/min. This means that the carburization inspection robot can increase detectability by approximately 140 times over the handheld detector, resulting in a substantial increase of detectability and a significantly reduced risk of tube failure due to carburization. A brief summary of the robot’s specifications is provided in TABLE 1. 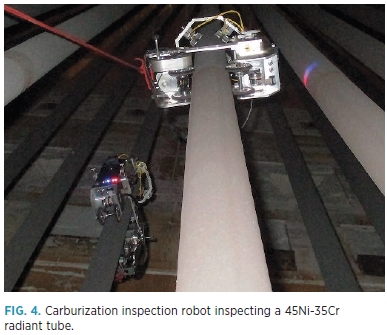 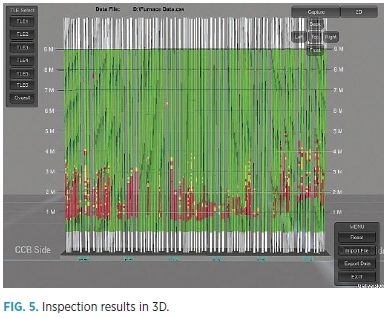 Benefits of using the carburization inspection robots during the furnace shutdown fall into three major aspects: operation and maintenance, reliability and safety. The carburization

inspection robot can substantially reduce a carburization inspection by approximately 68 hr for a furnace with an ethylene production of 4.5 tph. This reduction is equivalent to more than 300 t of ethylene production, aside from the cost of radiant tube replacement. The cost of maintenance and scaffolding are also dramatically reduced. The detectability of the carburization inspection robot is

much better than the handheld carburization detector within the same timeframe, so users can gain more insights of the radiant tube’s condition, decide what countermeasures to use, and more accurately estimate the remaining life of the radiant tube. Finally, the carburization inspection robot can help olefins plants enhance human safety by decreasing time used in the confined space and reducing work at high elevation on the scaffold.